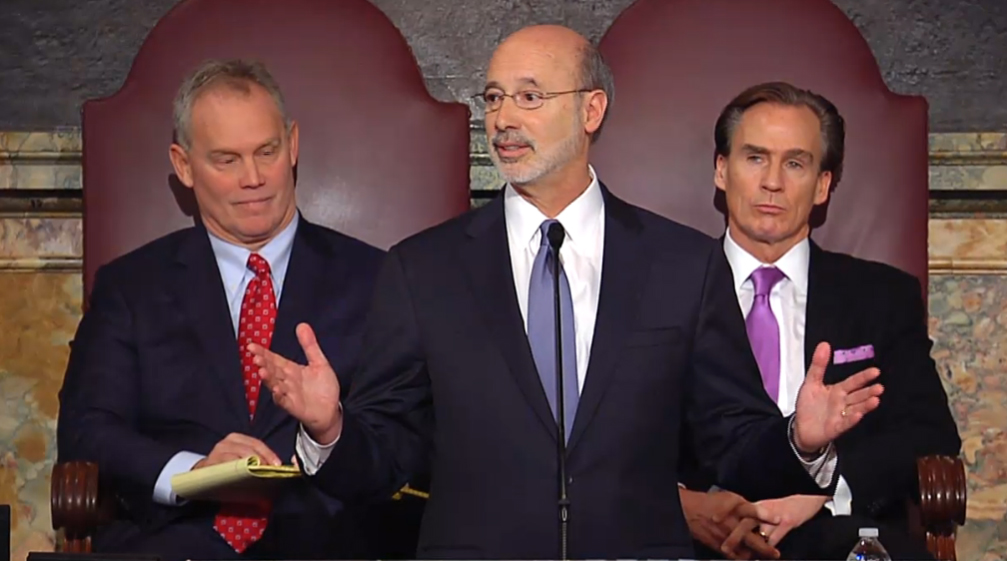 Harrisburg – Feb. 9, 2016 – Facing an unfinished 2015-16 budget with the need to reconcile a 2016-17 spending plan that has a looming $2 billion deficit, Gov. Tom Wolf was forced to focus his second state budget proposal on education and deficit reduction, according to Senate Democratic Leader Jay Costa (D-Allegheny.)

“Lawmakers have choices to make about Pennsylvania’s future; deal with tough issues up front or watch Pennsylvania wither as a consequence of self-inflicted fiscal wounds,” Costa said. “We need to come together and negotiate a bipartisan budget with the governor that makes key investments in education and deals with a $2 billion structural deficit.”

Wolf presented his $32.7 billion spending plan before a joint session of the General Assembly today. The plan uses the $30.8 billion yet-to-be-enacted budget agreement from last fall as the foundation for this year’s plan.

For 2016-17, the governor calls for $200 million more in education funding, $50 million for special education and an additional $60 million in pre-K dollars.   The budget also focuses on tackling the estimated $2 billion deficit in 2017 with a revenue enhancement package.

“It is incredibly frustrating to deal with issues year after year because there is no political will in the state House to finish the job it was sent to Harrisburg to do,” Senate Democratic Appropriations Chair Sen. Vincent J. Hughes (D-Philadelphia) said. “We need to complete the 2015-16 budget and get to work in dealing with those issues that are holding us back.

“Lawmakers can address the deficit and invest in education as a simple, direct approach that will pay dividends for years to come or they will have to explain why deep long-lasting cuts have to be made again.”

In his speech, the governor painted a picture of Pennsylvania’s landscape if there is continued inaction on adopting a reasonable forward-looking budget. He said property taxes will rise, human services will be stripped of funds and drug assistance programs for seniors would be slashed.

Senate Democratic Whip, Sen. Anthony H. Williams (D-Philadelphia/Delaware) said it is unwise for Pennsylvania to continue to jump from one fiscal crisis to another and that a bipartisan budget is a necessity.

“The negotiated agreement that passed the Senate in December proved that a bipartisan budget could be crafted even in a very partisan environment,” Williams said. “That spending plan included healthy education investments, support for job creation, human services, seniors and our most vulnerable.

“This budget plan makes lawmakers face up to the reality that if nothing is done to address the budget deficit than its growth will swamp all other initiatives.”

The proposed budget for 2016-17 is built from the budget agreement that awaits a final vote in the state House. However, if there is continued inaction there will be a $500 million deficit by the end of the year that will balloon to a deficit in excess of $2 billion next year.

The governor also said if lawmakers refused to act, funds for state-related universities (Penn State, Pitt, Temple and Lincoln) would be eliminated, another $1 billion would be cut from basic education, human services funding would be reduced by $600 million, and property taxes would skyrocket.

Wolf proposed a revenue package to deal with the deficit and make education investments. His plan would include an increase in the Personal Income Tax from 3.07 percent to 3.4 percent, sales tax expansions, taxes on tobacco, banks and the imposition of a new 6.5 percent tax on shale drilling.

“The Senate worked with the governor in a bipartisan way to produce an accord last year that would have addressed many of Pennsylvania’s most pressing issues,” Hughes said, noting that the bipartisan budget passed the Senate 43-7.

The legislature will soon begin a series of budget hearings to examine Gov. Wolf’s 2016-17 budget in detail.