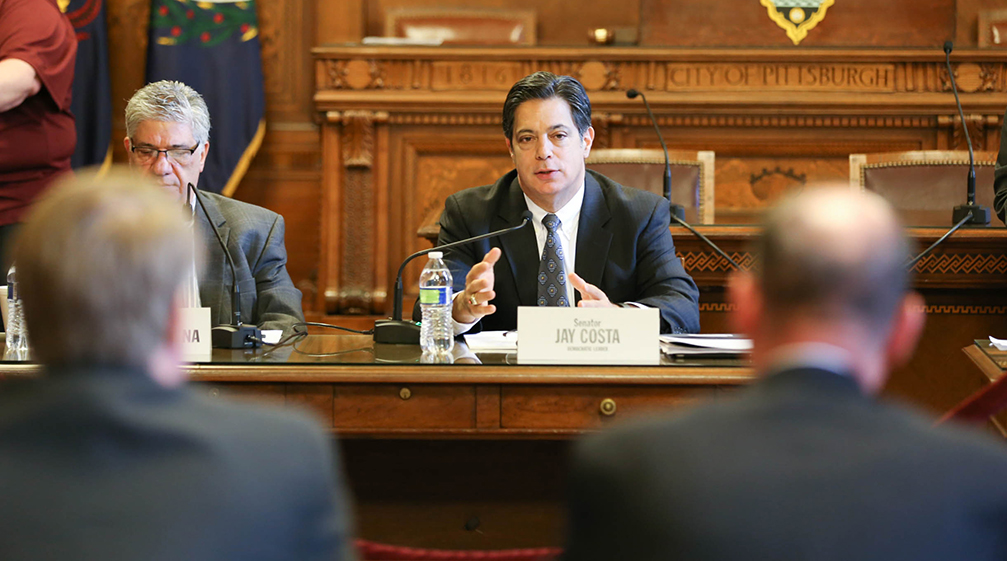 Pittsburgh – April 7, 2016 – At the request of state Senate Democratic Leader Jay Costa, the state Senate Democratic Policy Committee today held a hearing on ways to improve access to treatment for people suffering from addiction to opiates, such as heroin, opium and prescription drugs including Oxycontin, Percocet, Vicodin, morphine and others.

“Pennsylvania worsening opioid addiction crisis is both tragic and frightening,” said Sen. Lisa Boscola (D-Northampton/Lehigh), who chairs the committee. “Apart from the devastating human toll, this drug epidemic is spurring a new wave of crime, swelling our prisons and straining limited state and county treatment resources.”

Much of today’s hearing focused on treatment coverage and what resources are needed to help people overcome their addiction to opiates. Boscola noted that most Pennsylvania insurance plans only cover two to four weeks of inpatient rehabilitation despite national health expert claims that it takes a minimum of three months of inpatient care for treatment to work.

Costa added that “apart from the devastating human toll on opiate addicts and their families, there is a correlating financial consequence on state and local health agencies, prisons and service delivery systems.

“To help these people get off and stay off these drugs, we have to find a way to give them access to the appropriate level of treatment. Otherwise, we’re doing little more than recycling addicts, adding to police blotters, crowding our prisons and draining limited social service and healthcare resources.”

Last year, the legislature approved a measure (Act 139) that enables first responders and police officers to carry naloxone kits to reverse overdoses. Drug and Alcohol Programs Secretary Gary Tennis announced in September that officers had already saved 289 people. The law also provides Good Samaritan type protections for others who call 911 and provide help to those who are overdosing.

Deb Beck, who serves as president of the Drug and Alcohol Service Providers of Pennsylvania, cautioned that if “addictions go untreated, people will die.” She said the state’s drug and alcohol treatment system is overwhelmed.

Beck was critical of the health insurance industry, accusing them of engaging in “patterns of denial.” She said insurance carriers are playing “keep-away” with benefits. Beck added that she “met with numerous families with children who had died. They learned that they had coverage, but couldn’t figure out how to access it.”

She also noted that the prescription drug industry rakes in $16 billion nationwide from the sale of opiate pain killers, but has done nothing to help clean-up the epidemic these drugs have spurred.

Chris Monahan of the market regulation branch of the state Insurance Department said his agency has not received many individual complaints, but said the department will be doing a widespread market conduct study to make sure insurance companies are complying with coverage requirements.

Boscola said addiction to opiates knows no race, sex, creed, color or economic stature. She said addicts range from the “neighbor who was injured at work and became addicted to pain killers” to the “kid next door who tried some Oxycontin that a friend stole from his mom’s medicine cabinet and sold him at school.”

Costa suggested that the Insurance Department consider appointing an ombudsman to help consumers get around barriers. Allegheny County Executive Rich Fitzgerald suggested a database be created to help prevent addicts from supporting their habit by skipping around between doctors.